On the day of the eclipse, always a special day because of the rare natural event, Eivør plays in the cosy Ducsaal in Freudenburg. A tiny village in the corner of Germany where Luxembourg and France are close by as well. Her tour for the release of her latest album in 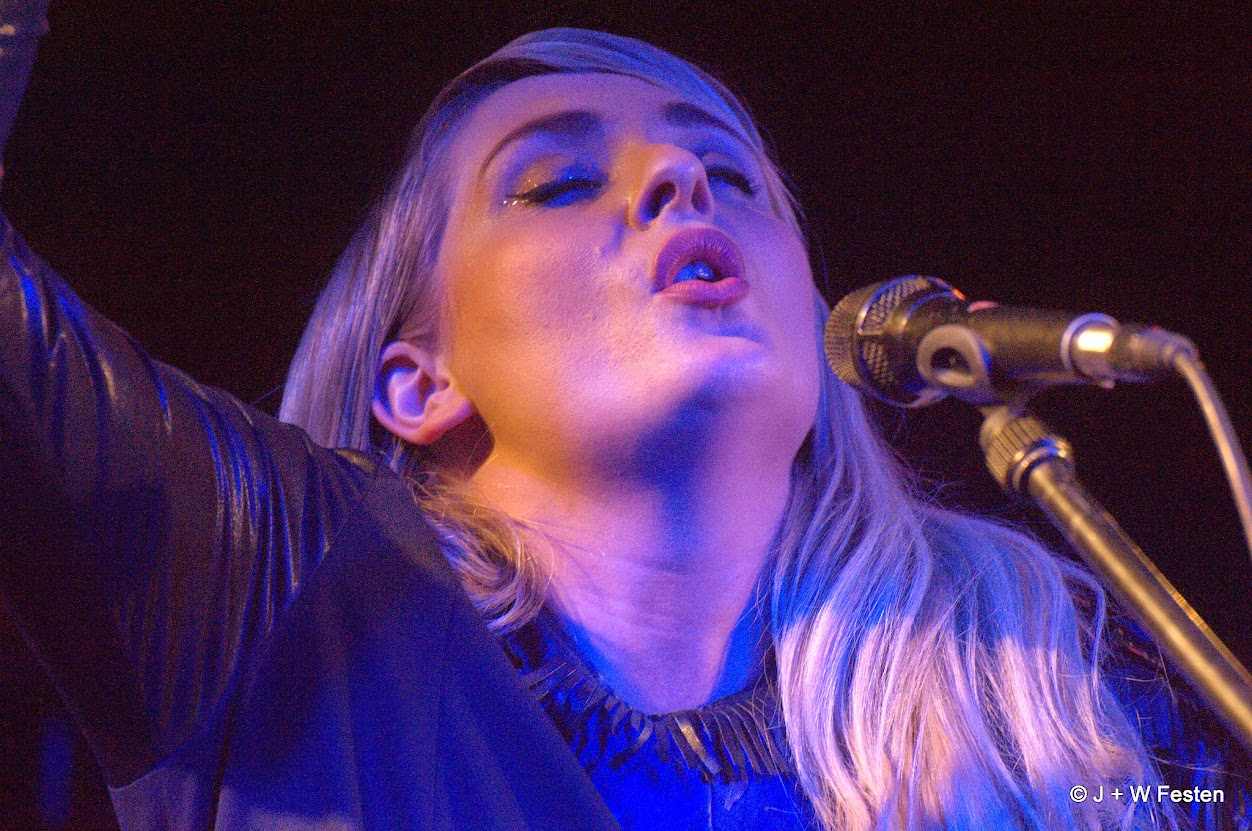 the English language “Bridges” brings her in all regions of Germany and a few places in Austria. While she played three sold-out concerts last month in Reykjavik with a full symphonic orchestra, entertaining two thousand listeners on each occasion, she has to make do with a maximum of two hundred visitors in Germany and on this special evening in Freudenburg even with as little as sixty people. The number of people in the audience does not make a difference to Eivør . “I always give it all I’ve got” she tells us after the show, much to her credit. And that is the secret of the magic during the performance of this singer from the Faroe Islands. An evening with Eivør has a touch of magic, at least all three of the shows I was lucky to attend in the last years had this magic.
Eivør opens with ‘Morning Song’, one of the songs we will hear from the album “Bridges”. A fine composition to start the show, which was preceded by her colleague singer-songwriter from the Faroe Islands Marius Ziska, singing songs from his own repertoire. It is clear from the start that Ziska will accompany Eivør for the remainder of the evening, because a space is kept free for him on the tiny stage of the Ducsaal. Next to drummer 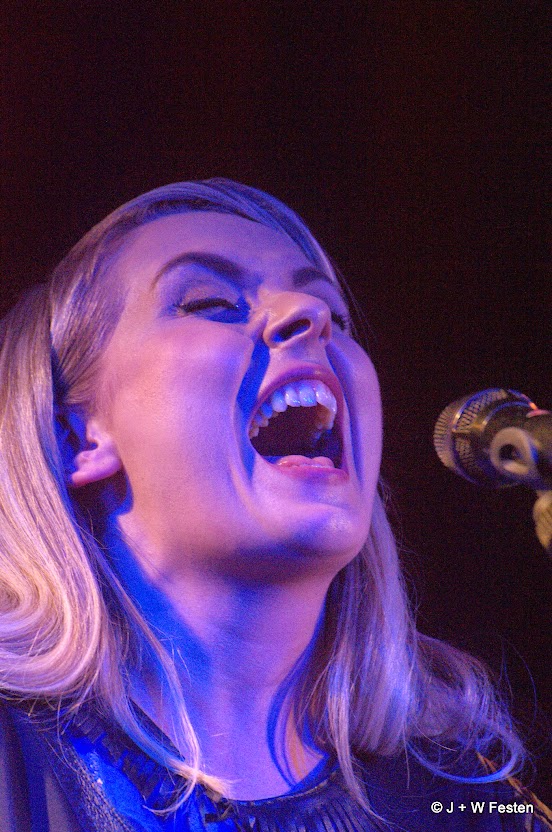 Høgni Lisberg of course her customary companion Mikael Blak plays keys en bass. Eivør herself  plays the guitar, ukelele and her special drum and above all she uses her schooled voice. The enthousiasm splashes from the stage! From her latest album we hear of course the title song ‘Bridges’, as well as ‘Remember Me’ which we recognize from her previous tour, ‘Faithful Friend’ which is close to her heart and the song ‘The Swing’, which refers to her childhood. But there is also room for some older songs, such as ‘Far Away’, ‘Trollabundin’ and ‘Boxes’. Especially ‘Trollabundin’ triggers exclamations of delight from the fans who have travelled from Belgium (as became clear after the show).
The stage is also granted to Marius Ziska who performs his ‘Going Home’ together with Eivor, which results in a beautiful version of the song.
The pop music with strong influences of folk, as brought by Eivør and Ziska, sprouts a fusion of styles. Eivør is once again very convincing with her mix of old and new songs, that are quickly taken up in your memory. 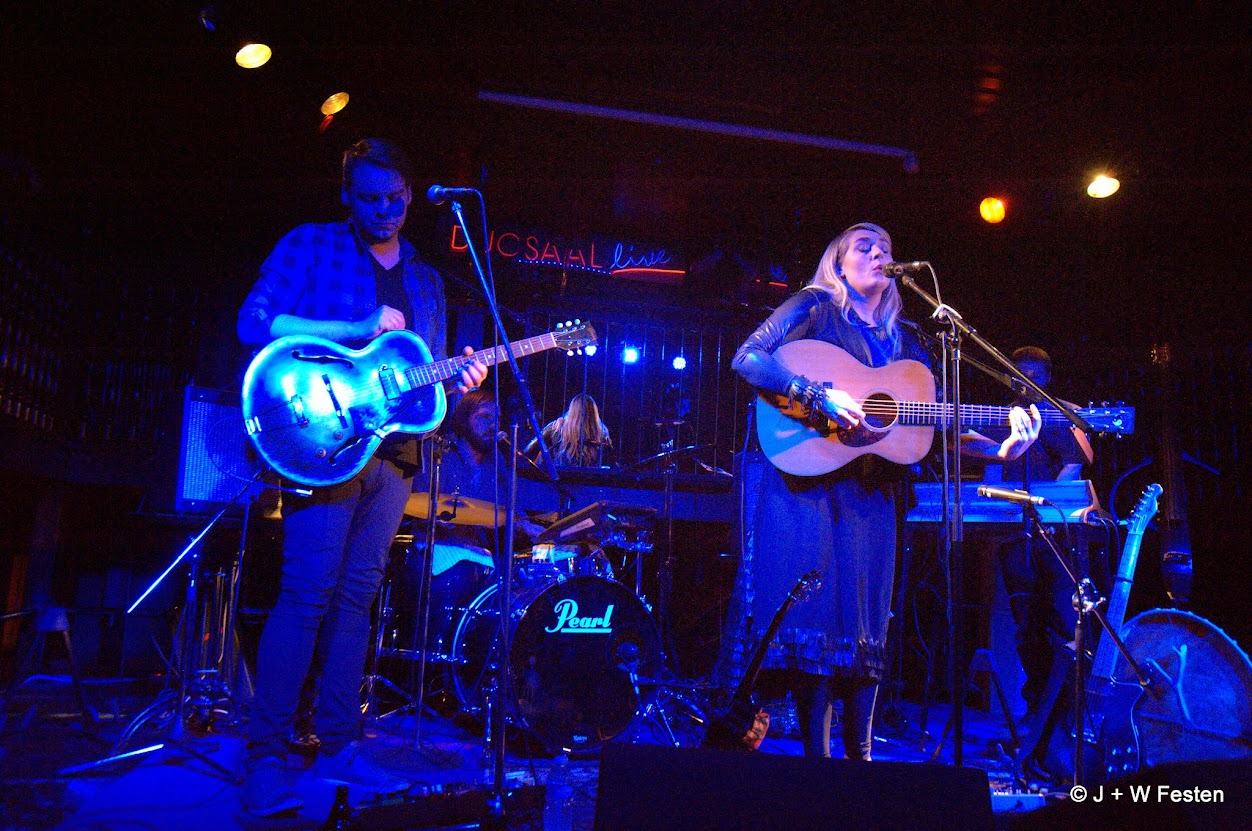 After the set, during which the audience applauds exuberantly after each song, there are of course the encores. But after a first series of encores she is called back a second time and as dessert we are served with ‘Purple Roses’, which she dedicates to her mother, who won the fight with cancer.
After the show Eivør has all the time in the world for her fans and she takes her time to talk and sign her name on the eagerly bought albums. The artist Eivør is a very friendly, sweet and approachable woman who has both feet firmly on the ground. She explains that she is currently working an a new album in her mother language from the Faroe Islands. When she visits the Netherlands in november she expects the album will have been released. She makes the performance an experience which is etched in your memory. Warm of heart we return to our hotel room, because the four hour drive back is a bit too long and this enables us to let the magic linger on.
(Thanks to Jacqueline Dalinghaus who did the translation)

More pictures you can find here.